Vin Diesel’s new Riddick movie (2013) is just the type of movie I don’t like: a sequel with no plot where nothing happens.

He wakes up on an abandoned planet, and finds a way to get off it. That’s it. The whole thing could have been accomplished in 3 minutes, but then the writers would have come up with something else. So it’s a 1hr 59minute stall.

It’s watchable, because there’s lots of action and cool stuff happening. But many parts are still pretty stupid: melodrama and rising tension and sound effects to keep you on the edge of your seat when nothing’s happening. And if were just a bad movie, I wouldn’t write about it.

But there’s actually some really interesting stuff going on – stuff that can serve as commentary about the state of our culture’s perceptions of women, gender bias, homosexuality, religious faith and prayer. So let’s dive in.

There are only two female characters in the story.

The first is Keri Hilson. She’s the smoking hot prisoner/love slave; the typical captured princess role. In a normal movie, the hero would come and rescue her. But Riddick is going to bypass all that typical hero stuff and go to something meatier.

So Keri Hilson gets gunned down in the first few minutes and gasps her last breath right in front of our hero. Keri was also the typical, normal, heterosexual girl waiting for a man to come save her. She was clingy and scared and frantic. Not Riddick’s type of chick at all, so it wouldn’t have worked out anyway. Just a bit of eye candy to hook our attention early on.

And that brings us to… 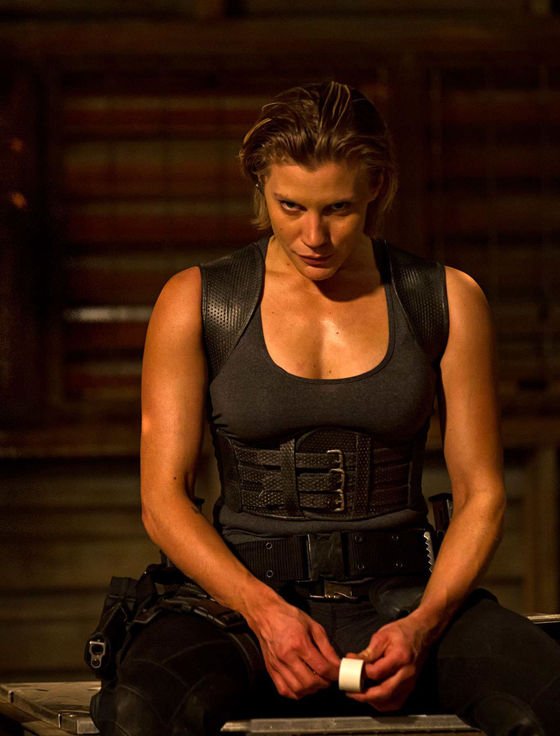 She’s an ass-kicking butch lesbo. A modern girl who can hold her own and doesn’t need a guy protecting her. She makes it pretty clear where her sexual interests lie by proclaiming “I don’t fuck guys.”

Her name places her as a sex-object and male fantasy – “Dahl” sounds like “Doll”… so the whole movie Riddick is saying obscene cowboy stuff like “Come ride on my lap, Doll” and “I’m gonna be balls-deep with Doll here later…”

And naturally, in the climatic moment, just at the height of the peak of terror, Riddick gets rescued by a guy who turned out to be more loyal than his son and Dahl descends on a rope to straddle him and ask him to have sex with her.

So on the one hand, this is a reverse story: the hero is being saved by the girl. That’s new.

But on the other hand, the plot implies that all lesbians just need a good man to set them straight.

She doesn’t fuck guys, but who can resist the sheer man-power of Vin Diesel? She only thought she was gay cuz she hadn’t met a real man yet.

That’s dangerous territory, especially for the target audience of movies like Riddick (manly-men, who work out, and love women, and want to be badass and bold and aggressive and assertive… guys who won’t stop when she says “no” or “I’m gay.”)

But what about the Christians?

The other really interesting character is Nolan Gerard Funk, a.k.a “Luna.” As if naming him after the moon goddess herself wasn’t feminine enough, his character role makes things pretty clear. He’s young and wide-eyed and pretty. He’s the comic relief. He’s a wimp. He’s probably somebody’s bitch. And he’s Christian. So we’re in some deep cultural-bias gender bending stuff here: Christians are usually anti-homosexuality (although I’ve met many gay Christians); and “manly-men” who like Riddick movies tend to be more conservative, pro-army, and religious (I’m just making this up as I go, by the way, but I think it holds).

Luna goes around with his Bible praying and interpreting the voice of God. He sees signs and symbols. God is speaking to him. Angels are protecting him.

Even though he’s on another planet with a million demon-like Alien monsters, he warps his entire reality to affirm his religious worldview.

PS) A note on the aliens: they are the most phallic, sexually suggestive aliens I’ve ever seen… they just want to sting you and inject their venom. So they could be symbolic for sexual temptation or “sins of the flesh”…drawing attention to the sexual tensions and metaphors in the subtext. 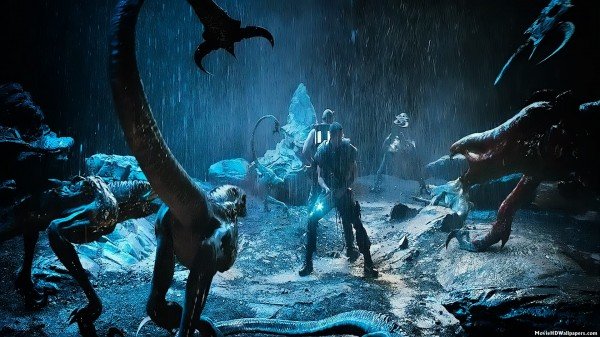 As another blogger notes, however, “Luna is such a cartoonish manifestation of faith, though, that you begin thinking the movie’s makers are just making fun. But he’s still by far the nicest man we see here. Also, a guy who tells Luna to stop blathering about God is killed about a minute later, while a man who defends Luna’s right to blather survives—as does Luna himself. Riddick seems to suggest that when you’re being chased by limb-ripping creatures, there are worse things you can have than a little faith.”

I think that passage has a pretty heavy bias. Worse things? Sure, like a tomato. Or a sponge. But there are also a ton of better things, like a grenade launcher, or a ship, or body armor, or lightning fast reflexes, or big muscles (although it doesn’t help most of the cast). Riddick himself tells Luna to “Leave God out of this”… which could be interpreted many ways… Riddick believes in God, but that God is absent or not responsible? Or just that, in this situation, everybody’s ideas about God mean exactly nothing, at best are a comfort in your last moments of life, at worst are a distraction, either way should be “left out of this.”

At any rate, it seems to me that the Riddick movie is telling this new brand of our most fearless warriors:

1) There’s no such thing as a lesbian, just a girl who hasn’t met a real man

2) Christians are dumb and wimpy; it’s better to get jacked up and ripped so you can totally kickass and save everybody, than it is to pray to God for salvation.

Did you see the movie? What are your thoughts?