Prepare to be amazed. Today I’ve been looking for pictures of Satan, and pictures of Garuda, for two separate art projects. What I’d never before realized, however, is that medieval depictions of The Devil are basically direct copies of much earlier (I presume) pictures of Garuda – the hindu flying Deity (half man, half eagle) that the God Vishnu flies around on. I’m guessing Garuda is first because A) Hinduism is older and B) they have very old statues of Garuda and descriptions in ancient text that predate Christianity. Garuda is horned, has three heads, wings, clawed feet, and sometimes eats people (usually a snake… but the style and form is similar to the Medieval versions but with people).

But it gets even more interesting…. Garuda has always been known as the destroyer of snakes. He usually has snakes in his mouth, and one under his feet. Pictures of Garuda are thus very similar to pictures of Michael defeating Satan (especially when Michael is kind of dancing, with flowing robes – very similar to Indian art!)

In which direction is the influence? Well – since Christianity grew out of Judaism, which forbade artistic representation, and Christianity also in the first century or two absolutely refused any kind of depiction or painting of saints, angels or biblical events, and since India was already an established trade since Alexander the Great, we should assume that Christianity borrowed its art from India. 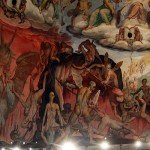 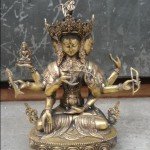 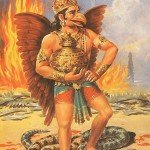 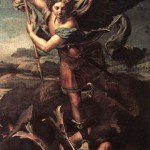 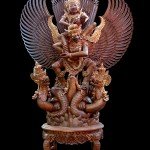 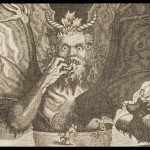 But wait! Michael is depicted as slaying the great dragon in Revelations – isn’t that where the art comes from? And Jesus gave his disciples power to trample over serpents (which was also given to Moses, via his magic snake staff). Problematically, it seems the literature of the Bible is also based on Indian mythology. Here’s the story of Garuda – see if you can find the parallels between the Book of Revelations, and also the Genesis Story of the flaming swords, etc. (An even more surprising parallel is that both these myths mirror the Native American legend of Kwatee – who had to save his mother from a big sea serpent-monster!)

Garuda’s father was the creator-rishi Kasyapa. His mother was Vinata, whose sister was Kadru, the mother of serpents. One day, Vinata entered into and lost a foolish bet, as a result of which she became enslaved to her sister. Resolving to release his mother from this state of bondage, Garuda approached the serpents and asked them what it would take to purchase her freedom. Their reply was that Garuda would have to bring them the elixir of immortality, also called amrita. It was a tall order. The amrita at that time found itself in the possession of the gods, who guarded it jealously, since it was the source of their immortality. They had ringed the elixir with a massive fire that covered the sky. They had blocked the way to the elixir with a fierce mechanical contraption of sharp rotating blades. And finally, they had stationed two gigantic poisonous snakes next to the elixir as deadly guardians.

Undaunted, Garuda hastened toward the abode of the gods intent on robbing them of their treasure. Knowing of his design, the gods met him in full battle-array. Garuda, however, defeated the entire host and scattered them in all directions. Taking the water of many rivers into his mouth, he extinguished the protective fire the gods had thrown up. Reducing his size, he crept past the rotating blades of their murderous machine. And finally, he mangled the two gigantic serpents they had posted as guards. Taking the elixir into his mouth without swallowing it, he launched again into the air and headed toward the eagerly waiting serpents. En route, he encountered Vishnu. Rather than fight, the two exchanged promises. Vishnu promised Garuda the gift of immortality even without drinking from the elixir, and Garuda promised to become Vishnu’s mount. Flying onward, he met Indra the god of the sky. Another exchange of promises occurred. Garuda promised that once he had delivered the elixir, thus fulfilling the request of the serpents, he would make it possible for Indra to regain possession of the elixir and to take it back to the gods. Indra in turn promised Garuda the serpents as food.

At long last, Garuda alighted in front of the waiting serpents. Placing the elixir on the grass, and thereby liberating his mother Vinata from her servitude, he urged the serpents to perform their religious ablutions before consuming it. As they hurried off to do so, Indra swooped in to make off with the elixir. From that day onward, Garuda was the ally of the gods and the trusty mount of Vishnu, as well as the implacable enemy of snakes, upon whom he preyed at every opportunity.