“I just need to know how he does it.”

This is the consuming passion of Psychologist Margaret Matheson (Sigourney Weaver) as she investigates a world-renowned blind psychic Simon Silver (Robert De Niro), who has resurfaced after decades for a final appearance.

The movie builds and builds, with supernatural attacks leading up to the death of Margaret. Her partner Tom Buckley (Cillian Murphy) takes over the case, determined to solve the mystery.

“Forget about Silver, there are certain things it’s better not to know,” says his girlfriend Sally (Elizabeth Olsen).

At this point in the movie, the implied moral seems to be this: that rigorous skeptics and scientists will be destroyed and their skepticism will consume them; they will break like waves against the paranormal rocks of our mysterious universe.

Margaret and Tom seem to be the fanatics, trying to use logic to solve the incredible paranormal power that they can’t accept as real.

Silver, meanwhile, has come back to prove to the world that his powers are real:

“It’s a matter of absolute priority that science begin to learn all it can about these forces. We can’t wait any longer. The aim of my public appearance is just to generate the necessary conditions so that our entire society will recognize the existence of other forms of energy. These forces can’t be ignored any longer. They have to be verified and accepted once and for all.” 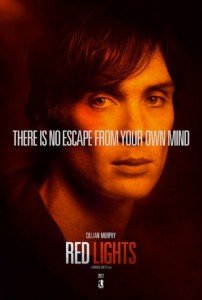 But Tom is relentless. When Simon goes through a special university study to test his powers, Tom gets secret footage. He tells an assistant to watch it carefully and find an answer: “You are the only guy separating the world from stupidity at this point in time.” He hasn’t been able to find anything himself.

“What does this mean?” he asks his assistant.

“No! It means Silver is pulling a fast one. Do you know how I know this? Because Telepathy does not exist. Because nobody has special powers.”

Again, this reads like a non-believer’s manic self-delusion. He is so desperate to disbelieve that he’s ignoring the evidence right in front of him. This is the classic atheist stereotype.

Tom somehow sneaks into a secret meeting with Simon, but doesn’t speak, and instead listens to Simon deliver a mini-lecture:

“From the time of Ancient Greece to the present day, philosophers and scholars have argued that man is essentially rational – I don’t happen to agree. One observes and studies another person without first studying oneself, how do we know that our instruments are appropriately set, how do we know we are reliable we have no proof. There’s only one way of gaining access to the truth. That’s not to expect anything. If our intentions aren’t pure, we might end up creating monsters.”

Deliberately or accidentally, Simon is sounding a lot like Jesus. Even more so later during his last big performance: 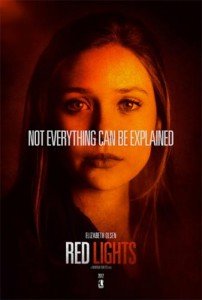 hat have you come to see – this?” (He levitates into the air).

“What makes us believe, what finally makes us come to accept? The question is, why did you come here today.”

“You will know the truth, and the truth will make you furious.”

At this point Tom appears. Simon’s bully has just beat the shit out of him in the bathroom. Now he stumbles into the theater and disrupts the show. He shouts:

“I wasn’t able. You can’t deny yourself. You can’t live in denial forever. I tried with all my strength and today it will be over. For you and for me. I just hope we’re both ready.”

Tom seems delusional. “They fill our head with noise. We renounce ever knowing ourselves. But you can’t deny yourself forever. Time goes on…”

And now it’s time for the big confrontation. Suddenly Thomas Buckley does everything that was done to him before, what previously we thought Simon had done; exploding lights, screeching noise, earthquake.

And suddenly the tables are turned. Simon demands, “How did you do that?!”

Tom has revealed himself as someone with true supernatural power, while simultaneously bringing down Simon as a fraud (to cap it all off, he proves that Simon could see the whole time and wasn’t really blind).

And we are left with this:

“A whole life denying myself, searching in silence for someone like me. My whole life looking for an answer, without finding it. I’ll never forgive myself for not revealing myself. For not giving you the consolation of knowing. There IS something else. You can’t deny yourself forever.”

And he looks up into the sky with a beatific expressions, at God I presume.

What does it MEAN?

As an entertaining movie, it’s pretty good. Not amazing, but good. But more interesting for me is what it means, and why I keep seeing these type of movies: the kind that play with motifs of faith, belief, certainty, and the paranormal.

There is an international war going on. We are all fighting for each other’s minds; fighting to convince others that we are are right and everyone else is wrong.

The question, is whether there is “something else.”

Atheism, secularism, science (yes I group science with the former two), humanism and freethought are gaining ground and advocating freedom from religion. Religion is an ancient and potentially dangerous superstition that has no room in the modern world, they say.

The religious, on the other hand, are ferociously defending their right to believe, but also their intelligence and rationality. They aren’t simply saying, we believe despite reason and logic (although they do say that). They are also convinced that they have sufficient grounds for belief; that believing is the smart and logical thing to do.

In the middle, are the tens of millions of people who don’t go to church but still believe in the supernatural. Ghosts, psychics, the afterlife, prayer, etc.

The argument about there being “Something Else” is heated. Eventually it always boils down to the possibility of the existence of God: if anything paranormal/supernatural exists, then so can God. As I’ve said often on this blog, this is why Christians like to believe in and be frightened by demons. If demons are real, so is God.

What is the Supernatural/Paranormal?

But what are we really talking about here? Atheists and scientists will say that there is nothing, there can be nothing, that is truly Supernatural or Metaphysical (as in “outside of nature”). They usually have the upper hand of knowing what they’re talking about.

New Age believers and religious folk often talk about “energy fields that can be measured by instruments” and “Quantum Physics” – so there is more out there than what we see, and this has been proven, so there IS “something else” – so there!

But this is a case of mistaken definition: anything that has a real cause and effect reaction, really exists, and is part of our natural order, even if we don’t understand it. And there is so much that we don’t understand. Apparently miraculous things, like mind-reading or telekinesis or dowsing could be real, but they would be acting within the limits of the rules of physics – rules which we have not yet discovered but one day might understand. There is nothing, atheists say, that operates outside of the physical universe, in some magical non-space on a separate level of non-existence from the one we are in (or even if there is, it can’t come into and affect the one we’re living in).

The reason is matters, is that movies like Red Lights try to stick their toe in the door and then throw it wide open, allowing for anything and everything. If a man can prove he has telekinetic abilities, there can be a magical flying teapot, and rainbow unicorns, and multiple universes where I’m screwing Emma Watson, and even God. Without understanding the specific rules of the phenomenon, one miracle is as good as any other, and we can and will believe anything.

But it is an inexcusable leap to go from subtle energy fields to a man flying around in the sky.

You probably picked up on it already, but the final confrontation in Red Lights is very similar to the confrontation between Peter and Simon Magus in Acts.

Simon Magus had the power to heal, to turn stones into bread, to travel trough the air, to stand unharmed in fires, change shape, become invisible, move objects and open locks without contact. St. Peter broke his legs trying to imitate Simon’s flight; or in another version, Peter prayed to God to stop Simon’s magic, and Simon fell.

But Simon wanted to pay for powers, that he believed could be learned. So he was really an early scientist, rather than a “True Believer” whose power came from God. (The world “Simony” – or paying for religious favors, comes from Simon). Similarly, Simon in the movie, although a fraud, is really just a clever entrepreneur, cashing in on his scientific/technological abilities – because any sufficiently advanced degree of technology seems like magic.

Both Simon Silver and Simon Magus wanted to understand, learn, and use these abilities for his own profit – rather than accepting them as miraculous proof of divinity. Simon is part of a long traditions of “blasphemous scientists” – the legacy of Satan, the forerunner of the Fausts and Captain Ahab… a tradition I’m now exploring for my second book.

Was Simon Magus the Founder of Christianity?

Interestingly, some scholars have argued that “Simon” was just a code name for St. Paul. The orthodox Church, led by Peter, was always fighting against the Gnostic church, founded by Paul – and the Gnostics were winning. So first they used a smear campaign directed as “Simon” to tear down his credibility.

That didn’t work. So next they wrote the acts, created a fantastical history, forged letters from Paul, and assimilated Paul into their own tradition while denouncing Paul’s own Gnostic teachings.

It’s too much material to get into here, and I’m not convinced about this theory, but it goes a long way to answer some of the questions I raised in my book Jesus Potter Harry Christ.

What do you think? Are there “really” supernatural phenomenon that can’t be measured by science?