Any good Christian has to believe in demonic possession. After all, Jesus was always casting out demons. If the Bible and Christianity is true, then Jesus couldn’t have mistakenly viewed mental illness using the common superstition of possession. He would have known better. So they’re real.

That basis has been the support for dozens of demonic possession/exorcism movies, which mostly make good entertainment because, demonically possessed people look really freaking scary. They are great horror flicks.

But the new movie “The Devil Inside” takes the genre a step further, by filming in the guise of a documentary that one daughter makes after her mother kills 3 people while being exorcised.The movie’s website (http://www.therossifiles.com/) invites you to be a part of the continuing investigation, shows a “real” newspaper article about the case, shows the “real” hospital footage, and the “real” original emergency call – all of this leading viewers to ask the question, “Is Maria and Isabella Rossi’s story a true story?”

The answer, although a resounding “no” (everything about the movie is fake) nevertheless gets confusing; on online chatboards users discussing the movie argue that it is based on real events, because demonic possession is true and exorcisms are real. According to one user on yahoo answers:

Yes, “The Devil Inside” is based on a true story. They filmed it that way so that it would look real. No one believes in that stuff until it happens to them. Then when it does happen to them they try to share their experience to others and other people still don’t believe. No one wants to believe the Devil is real. That doesn’t mean that he isn’t nor will it protect any of us from him. That movie is true. It is based on true events. It may not be a 100 % real because it was recreated, but the the whole movie of “The Exorcist” wasn’t either. The priest did not throw himself out of the window at the end. The devils greatest victory is getting people to believe that he doesn’t exist. People want to do what they want and don’t want to think about the consequences or what will happen if they suddenly realize all the “fun” they are having is sinful. People are becoming upset because they want the truth and they feel they are not getting it. The fact of the matter is, they are getting the truth they just choose to find something wrong so they can prove that it is false. Once they prove that it is false then they don’t have to face it and they can go on living thinking that it is just another story. Ignorance and anger for things that we all know deep down to be true, yet no one is ready to admit it. It was a good movie. I learned a lot.

To further confuse the matter, the Devil Inside website has links to real newspaper articles about possession, such as a post on the Telegraph called “Surge in Satanism sparks rise in demand for exorcists, says Catholic Church” and “Satanism through the ages”. What isn’t clear is that both of these articles are thinly-veiled propaganda.

According to one, “The term Satanism represents a broad range of religions, world views, and literature that all look favourably on Satan or similar rebellious figures.” What they don’t point out, however, is that there are No Satanists that believe Satan is real! Satanists view Satan favorably as a literary symbol, because he champions humanist values like self-direction, willpower, strength, free speech, the right to challenge authority. This includes the Church of Satan founded by Anton LaVey in 1966. But they don’t worship him as a God!

A handful of sensationalist book projects claiming to be from victims of Satanic cults (like Rosemary’s Baby, which was made into a movie in 1986), described all the disgusting details of these baby-eating, fornicating devil worshipers – leading to the widespread belief that these cults were real.

However, these books have all proven to be complete fabrications by evangelical fear-mongers. The FBI has never found ANY instance of a Satanic cult – and for obvious reasons, for anyone who believes and excepts religious ideaology cannot help but know that God is the eternal victor, and that there is no hope or reason to support the perpetually failed rebel figure. From within orthodox religion, Satan can NEVER be the hero, precisely because the rules defineGod to be the champion.

Nevertheless, dozens of high-profile Hollywood movies are based on the central theme of Satan wanting to takeover earth and a bunch of Satanists who need a baby to make this happen. It’s all fiction. Cults are always religious. People who do crazy, stupid, immoral things do it because they think God wants them to – there has never been any indication that they are doing it because they think Satan wants them to. However, some religious folks do convince themselves that they are “possessed” by Satan, therefore they have no choice or power or control. Belief in Satan allows people to let themselves be taken over by their worst impulses.

The Devil Inside Plot Summary

This newest look at exorcism tries hard to prove that possession is real. The daughter goes to Rome to learn more about it and hooks up with a team of young student-priests who are doing underground exorcisms, because there’s so much political tape nowadays that the church hardly gets the opportunity or legal approval to conduct one.

The aim of the movie, furthered by various coffee table discussions about possession, is to find “The REAL difference between demonic possession and mental illness.”

The tagline goes, “When you see a REAL possession, you’ll KNOW it’s not a case of mental illness.” In other words, rather than trust psychiatrists and doctors, who don’t really know anything about it, pure subjective experience of possession is enough to convince any witness. Hence – any Christian/believer who is determined that someone is possessed is RIGHT because the only proof they need is their own experience of the possession (in the same sense that they are right in their beliefs about God, because their personal experiences of Him are non-lingual, impossible to communicate but nevertheless totally convincing.)

Interestingly, the tradition of exorcism doesn’t come from Christianity at all; it’s a remnant of Jewish-Pagan magical practices, based on beliefs in the multiplicity and hierarchies of demons and angels. You need to learn a demon’s name and rank so you can control him (not only for casting him out – in the same way, Isis learned Set’s true name, which is what gave her magical powers, and King Solomon learned the king of the demons’ true name, which is how he got the magic ring with which he controlled all of the demons (who he commanded to build the first temple – yes, Solomon built the first temple through demon labor and black magic.)

Later priests of Jesus used Jesus’ true name as a magical password to command demons – using the same magical tradition that was developed mostly in Ephesus, and you can still find in the Greek Magical Papyri.

In a critical scene, the skeptical camera man says:

“This is it. We are now going to see a person who is possessed. So now we can see if it’s bullshit or not.” 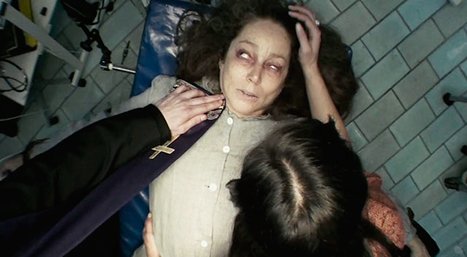 They tie the woman to the bed. I have to wonder how many women were persecuted in the early days of the church for being possessed, in the same way that they were later accused of being witches and burnt; I also have to wonder whether priests got some sadistic pleasure in the ritual).

The Proof: The demon knows the protagonist’s name. Uncanny knowledge and omnipotence is a common proof of demonic possession. Interestingly, the exact same proof was used to sell “Heaven is Real” – a book about a kid who almost dies and goes up to heaven, and comes back with knowledge he just couldn’t have known.

After that scene, everybody is convinced that exorcism is real – then the possession starts to spread like wild fire. Everybody gets possessed. The start killing themselves and each other. It’s madness.

Yes – the Church has a long history of exorcism and maintains that demonic possession is possible. When I was studying theology in Malta, I met one of the Church’s 6 exorcists. However, this movie and many others like it, including the original Exorcist, were based on the true life story of Anneliese Michel; a sick woman who was convinced that she was possessed. Her family finally convinced a young priest to perform an exorcism (even though they’d already asked the Church, who had told them “NO, and continue medical treatment”). In the last year of her life, Anneliese refused all medical doctors and was treated ONLY by the exorcist, a couple times a week. She finally died of starvation and malnutrition.

What we can prove is that there are definitely people who think they are possessed. To my knowledge, every account of possession has only happened to sincere and devout believers – if you believe in Christ and God, you also must fear the Devil. And if your fear eclipses your faith, you may begin to believe that you’re possessed. (The safest way to avoid possession, it seems, would be to become an atheist – I’ve never heard of any possessed atheists; atheists are also much less likely to commit violent crimes, according to all statistics.)

And for someone who thinks they are possessed, exorcism may actually be effective; hence you could argue that exorcists are a critical and vital role in the Church Community – to deal with anybody whose fragile mind is overpowered whenever the priests have too successfully established fear of Satan and Hell.